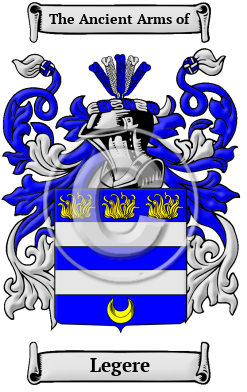 Early Origins of the Legere family

The surname Legere was first found in Burgundy (French: Bourgogne), an administrative and historical region of east-central France

Early History of the Legere family

Notable amongst the family at this time was Antoine I Léger, a theologian born in 1594. Antoine II, his son, was a protestant pastor. Born in Geneva in 1652, Antoine II was pastor at a parish in the country around Geneva, and in 1684 he became the town pastor. In 1686 he was named professor of philosophy, and was successful in this career for twenty-four years. Michel Léger, his son, was also a successful...
Another 74 words (5 lines of text) are included under the topic Early Legere Notables in all our PDF Extended History products and printed products wherever possible.

In the United States, the name Legere is the 8,555th most popular surname with an estimated 2,487 people with that name. [1]

Migration of the Legere family

Some of the first settlers of this family name or some of its variants were: 160 individuals who arrived from France onto Canadian shores between 1600 and 1900. Among them, César Léger married in Quebec in 1644; Franç.