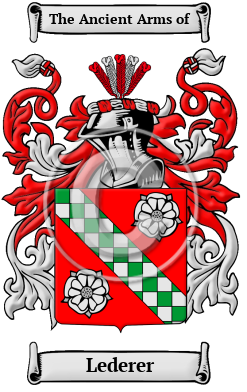 The surname Lederer was an occupational name for a tanner, derived from the German word "lederaere," meaning "leather worker." While patronymic and metronymic surnames, which are derived from the name of the father and mother respectively, are the most common form of a hereditary surname in Germany, occupational surnames also emerged during the late Middle Ages. Many people, such as the Lederer family, adopted the name of their occupation as their surname.

Early Origins of the Lederer family

The surname Lederer was first found in Austria, where the name was anciently associated with the tribal conflicts of the area. They declared allegiances to many nobles and princes of early history, lending their influence in struggles for power and status within the region. Chronicles first mention Heynke Lederer of Liegnitz in 1372, and Sigfrid der Ledergaerwe of Schorndorf in 1302. The family branched into many houses, and their contributions were sought by many leaders in their search for power.

Early History of the Lederer family

This web page shows only a small excerpt of our Lederer research. Another 184 words (13 lines of text) covering the years 1723, 1778, 1795, 1842, and 1860 are included under the topic Early Lederer History in all our PDF Extended History products and printed products wherever possible.

In the medieval era, many different cultural groups lived in the German states. There are thus many regional variations of German surnames from that era. Westphalians spoke Low German, which is similar to modern Dutch. Many German names carry suffixes that identify where they came from. Others have phrases attached that identify something about the original bearer. Other variations in German names resulted from the fact that medieval scribes worked without the aid of any spelling rules. The spelling variations of the name Lederer include Lederer, Leder, Lederman, Ledermann, Lederle and others.

During this period prominent bearers of the name Lederer were August Gottlob von Lederer (1723-1795), who was an Austrian state official. He was born in Saxony, where his father was a highly placed administrator, and later served in Brussels as an official at the court. He became secretary of the...
Another 50 words (4 lines of text) are included under the topic Early Lederer Notables in all our PDF Extended History products and printed products wherever possible.

In the United States, the name Lederer is the 12,799th most popular surname with an estimated 2,487 people with that name. [1]

Lederer migration to the United States +

Austria was made a republic after the First World War. The Austro-Hungarian Empire was broken up by the Treaty of Versailles and many of its people found themselves in the new nation of Czechoslovakia. Many other Austrians and expatriate Austrians made their way to North America in the 20th century. Most landed in Philadelphia, later continuing on to the states of Ohio, Texas, Illinois, California, New York, and Maryland. Some Austrian settlers also went to western Canada and Ontario. Research into the origins of individual families in North America revealed records of the immigration of a number of people bearing the name Lederer or a variant listed above:

Lederer Settlers in United States in the 17th Century

Lederer Settlers in United States in the 18th Century

Lederer Settlers in United States in the 19th Century