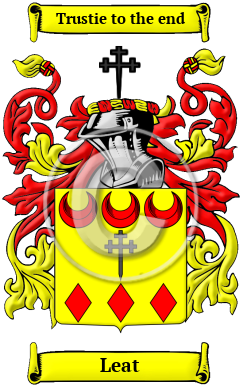 Early Origins of the Leat family

The surname Leat was first found in the county of Edinburgh at Leith, a burgh and sea-port town. "This place, which is of considerable antiquity, formerly belonged to the abbey of Holyrood, and, in a charter of David I. to the monks of that establishment, is noticed under the designation of Inverleith, from its position near the influx of the river or Water of Leith into the Frith of Forth." [1]

Early History of the Leat family

This web page shows only a small excerpt of our Leat research. Another 99 words (7 lines of text) are included under the topic Early Leat History in all our PDF Extended History products and printed products wherever possible.

More information is included under the topic Early Leat Notables in all our PDF Extended History products and printed products wherever possible.

Leat migration to the United States +

Leat Settlers in United States in the 19th Century

Leat Settlers in United States in the 20th Century

Leat Settlers in Australia in the 19th Century

Leat Settlers in New Zealand in the 19th Century

Historic Events for the Leat family +