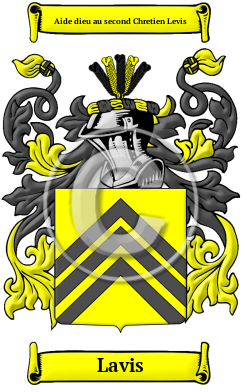 Noble surnames, such as Lavis, evoke images of the ancient homeland of the French people. The original bearer of the name Lavis, which is a local surname, once lived, held land, or was born in the beautiful île-de-France region. In France, hereditary surnames were adopted according to fairly general rules and during the late Middle Ages, names that were derived from localities became increasingly widespread. Local names originally denoted the proprietorship of the village or estate. The Lavis family originally derived its surname from the name of the place in Levy Saint Nom in île-de-France.

Early Origins of the Lavis family

The surname Lavis was first found in île-de-France, where this remarkable family has been traced since the 12th century.

The family branched into several other regions throughout France, and held lands and estates. One such branch extended to Bourgogne from Lugny in the 1400's, by Eustache de Lévis. He was the second son of Philippe, who was the Lord of Florensac and of Alix de Quélus. After his marriage to Alix, Dame of Cousan and daughter of Hugues Damas, Lord of Cousan and Alix of Beaujeu, Philippe became the owner of lands in Lugny in Charollais, which was one of the four largest baronies in the county and one that his descendants still hold.

This family also held fiefs in la Perrierre, le Plessis, Bragny, Ecuelle, Châtelet, la Barre, Saint-Germain-du-Plain, Ouroux, Limon, Thorey, Servigny, and Talant in Chalonnais, as well as the baronies of Bernon, Servoisy, and Lignière. François Gaston, Duke of Lévis, (1720-1787), born in Ajac (Aude), was a Marshal of France and tried in vain to save Canada. His son, Pierre Marie Gaston, was a member of the French National Assembly. The family held the hereditary titles of Duc de Venetadour, Duc de Damville, and the Duc de Fernando-Luis.

Early History of the Lavis family

Notable amongst the family was Louis Charles de Lévis (1647-1717), a French nobleman and Duke of Ventadour. François-Gaston de Lévis, Duc de Lévis (1719-1787), styled as the Chevalier de Lévis until 1785, was a nobleman and a...
Another 35 words (2 lines of text) are included under the topic Early Lavis Notables in all our PDF Extended History products and printed products wherever possible.

Lavis Settlers in Australia in the 19th Century