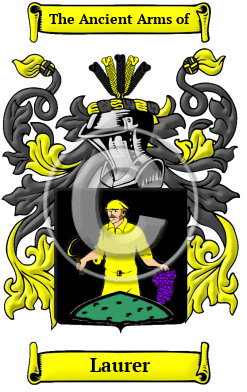 Early Origins of the Laurer family

The surname Laurer was first found in Bohemia, where this family became a prominent contributor to the development of the area from ancient times. Ancient chronicles mention Friedrich Lur of Michelfeld in 1343. Always prominent in social affairs, the name became an integral part of that turbulent region as it emerged to form alliances with other families within the feudal system.

Early History of the Laurer family

Spelling variations of this family name include: Lauer, Laure, Lauerer, Laurer, Lauher, Lau, Laue and others.

During this early period, notable bearers of the name Laurer included Nicolaes Lauwers (1600-1652), a Flemish engraver; Conrad Lauwers (1622-1675), a Flemish engraver from Antwerp; Franz von Lauer (d.1803), who was a member of the Austrian branch of Lauers. He was...
Another 41 words (3 lines of text) are included under the topic Early Laurer Notables in all our PDF Extended History products and printed products wherever possible.

Laurer migration to the United States +

Laurer Settlers in United States in the 19th Century