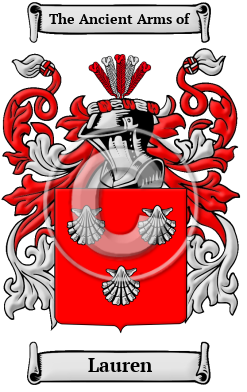 The surname Lauren comes from an old French given name Laurens (Laurentius in Latin). Versions of this given name were popular throughout Christian Europe due to a Saint, so named, who was martyred in Rome in the 3rd century A.D.

Early Origins of the Lauren family

The surname Lauren was first found in Provence.

Early History of the Lauren family

More information is included under the topic Early Lauren Notables in all our PDF Extended History products and printed products wherever possible.

Lauren migration to the United States +

Lauren Settlers in United States in the 19th Century

Suggested Readings for the name Lauren +