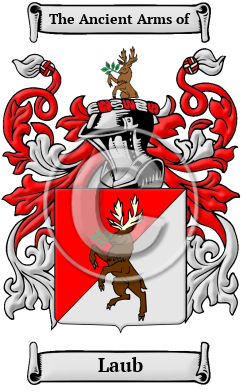 The Laub surname is derived one of several places named Laub in Germany. These place names are in turn derived from the Old High German word "loup" denoting "a leafy or deciduous wood."

Early Origins of the Laub family

The surname Laub was first found in Kassel, in Hesse (central Germany) where one of the earliest of the name on written record was Else undir der Loeyben, in 1358. One line of the surname comes from Lauba, near Saarbruecken in the Rhine Province.

Early History of the Laub family

This web page shows only a small excerpt of our Laub research. Another 43 words (3 lines of text) covering the years 1386 and 1436 are included under the topic Early Laub History in all our PDF Extended History products and printed products wherever possible.

Spelling variations of this family name include: Laub, Lauber, Lauben, Laubach and others.

More information is included under the topic Early Laub Notables in all our PDF Extended History products and printed products wherever possible.

Laub migration to the United States +

Laub Settlers in United States in the 18th Century

Laub Settlers in United States in the 19th Century

Historic Events for the Laub family +