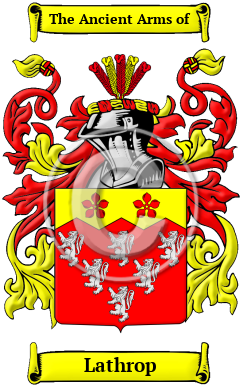 Early Origins of the Lathrop family

The surname Lathrop was first found in Yorkshire where conjecturally, the surname is descended from the tenant of the lands of Lowthorpe, held by Beverley from the Archbishop of York who was recorded in the Domesday Book census of 1086.

Early History of the Lathrop family

Outstanding amongst the family at this time was John Lothropp (1584-1653), sometimes spelled Lothrop or Lathrop, an English Anglican clergyman, who became a Congregationalist minister and emigrant to New England. Born in Elton in the East Riding of Yorkshire, he was baptised on 20 December 1584. He attended Queens' College, Cambridge, where he matriculated in 1601, graduated with a BA in 1605, and with an MA in 1609. He was ordained in the Church of England and appointed curate of a local parish in Egerton, Kent. But in 1623 he renounced his orders and joined the cause of the Independents. Following...
Another 164 words (12 lines of text) are included under the topic Early Lathrop Notables in all our PDF Extended History products and printed products wherever possible.

In the United States, the name Lathrop is the 5,226th most popular surname with an estimated 4,974 people with that name. [3]

Lathrop migration to the United States +

Lathrop Settlers in United States in the 17th Century

Lathrop Settlers in United States in the 19th Century

Suggested Readings for the name Lathrop +