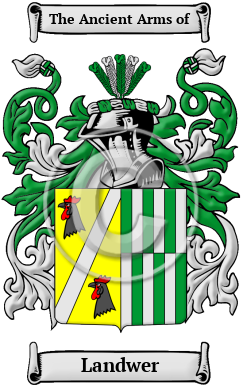 The long history of the distinguished surname Landwer begins in Germany, where the name originated. The name is derived from the Middle High German "lantwer," meaning "one who protects the land," and refers to a guard living at the border trench. It is likely that the progenitor of the name was someone who was employed as a border watchman.

Early Origins of the Landwer family

The surname Landwer was first found in Swabia, where its earliest records have been found. The first known bearer of the name was Lantwerer of Vorbachzimmern, who was recorded in "Das alteste Burgerbuch der Stadt Hornberg" in 1311. The Landwer family established its ancestral home in Swabia during this formative period, and quickly became prominent in the region, figuring prominently in the area's early history and contributing greatly to the development of medieval Swabian society.

Early History of the Landwer family

This web page shows only a small excerpt of our Landwer research. Another 150 words (11 lines of text) covering the years 1311, 1530, 1657, and 1683 are included under the topic Early Landwer History in all our PDF Extended History products and printed products wherever possible.

Another 28 words (2 lines of text) are included under the topic Early Landwer Notables in all our PDF Extended History products and printed products wherever possible.

Landwer migration to the United States +

Landwer Settlers in United States in the 19th Century