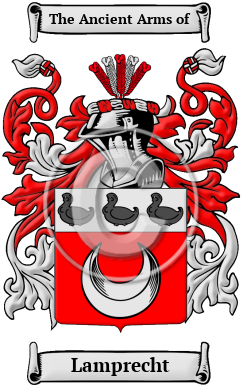 The roots of the Lamprecht family are found in the ancient German state of Bavaria. Lamprecht is one of the most common styles of German surname, that of patronymics and matronymics - names derived from the given names of the father or mother of their original bearers. Lamprecht is derived from the Old Germanic name Landbehrt, which means shining land or holy land. The name Lambert, with its many regional variations, was popular both as a first and last name throughout the Middle Ages. This was partly owing to the fame of Bishop Lambertus von Maastricht who lived in the 8th century.

Early Origins of the Lamprecht family

The surname Lamprecht was first found in Franconia, where the name could be considered to make a great early contribution to the feudal society which became the backbone of early development of Europe. The name Lambrecht with its many regional variations was much loved both as a first and last name throughout the Middle Ages. This was partly owing to the fame of Bishop Lambertus von Maastricht who lived around 700 AD. The oldest Germanic variation is Land-behrt, meaning literally "shining-land" or "holy-land." The variation Lamprecht especially became prominent in local affairs and branched into many houses which played important roles in the tribal and national conflicts of the Middle Ages, where each group sought power and status in an ever-changing territorial profile.

Early History of the Lamprecht family

Many cultural groups lived in the German states in medieval times. Each had its own dialect and traditions, and unique variations of popular names. Low German, which is similar to contemporary Dutch, was spoken in Westphalia. German names are characterized by additions such as regional suffixes and phrases that tell something about the origin or background of its original bearer. Further contributing to the variation in German names was the fact that there were no spelling rules in medieval times: scribes recorded names according to their sound. The recorded spelling variations of Lamprecht include Lambrecht, Lampert (Northern Germany), Lamprecht (Southern Germany), Lamrecht, Lambreckt, Lamreckt and many more.

Prominent among members of the name Lamprecht in this period include Lambert of Hersfeld (d.1088), a German chronicler and historian, who was a Thuringian by birth and became a Benedictine monk. Francis Lambert (1486-1530) was a Protestant reformer who became head of theological faculty in Marburg. Jan Baptist Lambrechts (1680-c.1731) was a Flemish painter mainly...
Another 55 words (4 lines of text) are included under the topic Early Lamprecht Notables in all our PDF Extended History products and printed products wherever possible.

Lamprecht migration to the United States +

Between the mid-17th and mid-20th centuries, German settlers arrived in North America by the thousands. Persecution based on religion and poverty were great motivators in this large-scale migration. So too was the opportunity for tenant farmers to own their own land. Ample land and opportunity awaited the settlers who went to such states as Pennsylvania, Texas, New York, Illinois, and California, as well as Ontario and the prairie provinces of Canada. Research into the origins of individual families in North America revealed records of the immigration of a number of people bearing the name Lamprecht or a variant listed above:

Lamprecht Settlers in United States in the 20th Century

Historic Events for the Lamprecht family +