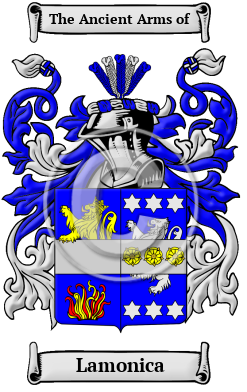 Sicily, one of the oldest and most beautiful island regions of Italy, is the esteemed birthplace of numerous prominent families, including the family that bears the surname Lamonica. Although people were originally known only by a single name, it became necessary for people to adopt a second name to identify themselves as populations grew and travel became more frequent. The process of adopting fixed hereditary surnames was not complete until the modern era, but the use of hereditary family names in Italy began in the 10th and 11th centuries. Italian hereditary surnames were developed according to fairly general principles and they are characterized by a profusion of derivatives coined from given names. Although the most common type of family name found in Sicily is the patronymic surname, which is derived from the father's given name, names derived from occupations are also found. Occupational surnames, which are less common than other types of surnames in Italy, date back to the feudal era. However, under the Feudal System, occupational names did not become hereditary until the offices themselves became hereditary. It was only after an occupation was inherited by several generations in lineal descent that occupational names came to be applied to entire families, and so became a hereditary surname. The surname Lamonica is a common occupational name for a monk. The surname Monaco is commonplace across Italy, but it is more frequently found in the south of the country and in the south, it is often preceded by the articles "Lo" and "La." The Sicilian Monaco family, who called themselves Del Monaco, originally came from France. The Del Monaco family arrived in Italy under the reign of King Alfonso, settled first in Cosenza, and from there, moved to Sicily. One line of this family prospered in Messina, and another in Trapani.

Early Origins of the Lamonica family

The surname Lamonica was first found in Palermo (Sicilian: Palermu, Latin: Panormus), a city in Insular Italy, the capital of both the region of Sicily and the Province of Palermo where the Monaco family arrived from France in about the 12th century. In those ancient times only persons of rank, the podesta, clergy, city officials, army officers, artists, landowners were entered into the records. To be recorded at this time, at the beginning of recorded history, was of itself a great distinction and indicative of noble ancestry. Originally French the family branched into Italy during the time of King Alfonzo. Franchesco was the King's official representative for Sicily in 1442 and became Governor of the Camera region in 1449.

Early History of the Lamonica family

There are many variations of most of those Italian names that originated in the medieval era. Some of these come from regional differences, like the tradition of ending northern names in "o" and southern names in "i". Others come from inaccuracies in the recording process, which were extremely common in the eras before dictionaries standardized spelling. Some of the spelling variations of Lamonica are Monaco, Monica, Monicault, Monicaux, Monica, LaMonica and many more.

Prominent among bearers of this surname in early times was Lorenzo Monaco, (c.1370-1425), a painter and one of the leading artists in Florence at the beginning of the 15th century, Francesco Monaco, who became the Governor of the Royal Chamber in 1449, and Andrea...
Another 44 words (3 lines of text) are included under the topic Early Lamonica Notables in all our PDF Extended History products and printed products wherever possible.

Migration of the Lamonica family

An investigation of the immigration and passenger lists has revealed a number of people bearing the name Lamonica: Nicola Delmonaco, who sailed aboard the SS Alesia from Naples, arriving in NY on March 22; 1893; Alessandro Del Monaco, who arrived in New York aboard the S.S. Vincenzo Florio from Palermo January 7.