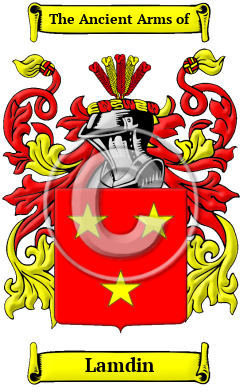 Early Origins of the Lamdin family

The surname Lamdin was first found in Berwickshire where they held a family seat on the English/Scottish border. After the Norman Conquest of England many of Duke William's rebellious Barons moved north. The border became a convenient no-man's land. Notable families such as the Percy, the Umfravilles and the Nevilles gathered many supporting clans around them. In the 16th century they became known as the 'unruly clans'. In that century, many of those clans drove their herds south, and they settled in Yorkshire and Lancashire. The name was first recorded in the lands of Lamben in Berwickshire anciently known as Hassington.

Early History of the Lamdin family

This web page shows only a small excerpt of our Lamdin research. Another 92 words (7 lines of text) covering the years 1261 and 1317 are included under the topic Early Lamdin History in all our PDF Extended History products and printed products wherever possible.

The name, Lamdin, occurred in many references, and from time to time, it was spelt Lamben, Lampden, Lamden, Lambdin, Lamdin and others.

More information is included under the topic Early Lamdin Notables in all our PDF Extended History products and printed products wherever possible.

Migration of the Lamdin family

The New World beckoned settlers from the Scottish-English borders. They sailed aboard the armada of sailing ships known as the "White Sails" which plied the stormy Atlantic. Some called them, less romantically, the "coffin ships." Among the early settlers bearing the Lamdin surname who came to North America were: the name represented in many forms and recorded from the mid 17th century in the great migration from Europe. Migrants settled in the eastern seaboard from Newfoundland, to Maine, to Virginia, the Carolinas, and to the islands..