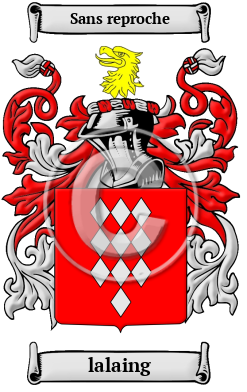 Early Origins of the lalaing family

The surname lalaing was first found in Artois, a former province of northern France.

Early History of the lalaing family

This web page shows only a small excerpt of our lalaing research. Another 115 words (8 lines of text) covering the years 1453, 1653, 1779 and 1859 are included under the topic Early lalaing History in all our PDF Extended History products and printed products wherever possible.

More information is included under the topic Early lalaing Notables in all our PDF Extended History products and printed products wherever possible.

Migration of the lalaing family

Some of the first settlers of this family name or some of its variants were: Jean Lalanne settled in Louisiana in 1756; Paul Leling settled in Philadelphia in 1749; E. Lelling settled in San Francisco, California, in 1852.