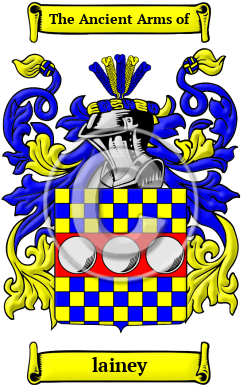 Early Origins of the lainey family

The surname lainey was first found in Lincolnshire where "Walter de Aincourt, who came from Aincourt, a lordship between Mantes and Magny [Normandy], where the remains of the ancient family castle still exists. Walter was cousin of Remigius, Bishop of Lincoln, the munificent builder of Lincoln Cathedral, and obtained, as his share of the spoil, no less that sixty-seven lordships in several counties, chiefly in Lincolnshire." [1]

Early History of the lainey family

This web page shows only a small excerpt of our lainey research. Another 172 words (12 lines of text) covering the years 1450, 1510, 1600, 1190 and 1421 are included under the topic Early lainey History in all our PDF Extended History products and printed products wherever possible.

Outstanding amongst the family at this time was William of the D'Eyncourts, who in 1421, "was retained by indenture to serve King Henry V. in his Warrs beyond sea...
Another 28 words (2 lines of text) are included under the topic Early lainey Notables in all our PDF Extended History products and printed products wherever possible.

lainey migration to the United States +

lainey Settlers in United States in the 18th Century

lainey Settlers in United States in the 19th Century

lainey Settlers in Canada in the 19th Century