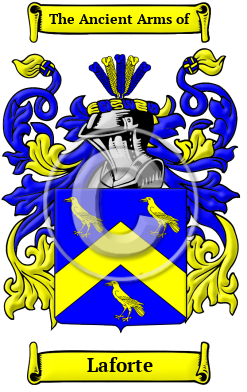 Early Origins of the Laforte family

The surname Laforte was first found in Guyenne.

Early History of the Laforte family

This web page shows only a small excerpt of our Laforte research. Another 22 words (2 lines of text) covering the years 1768, 1793, 1845, 1850, 1870, and 1890 are included under the topic Early Laforte History in all our PDF Extended History products and printed products wherever possible.

Spelling variations of this family name include: Laforte, Lafort, Fort, Forte, Forteau, Fortier and others.

Notable amongst the name was Ferjeux Fortier, a colonel in 1768. Jean-Antoine Siméon-Fort, born in 1793, was a painter in Valence; Jean-Aimé-Aristide Fort was rear admiral in 1845; Joseph-August-Aristide Fort was a pharmacist at this time; Jacques-Paul Fort was a general in...
Another 42 words (3 lines of text) are included under the topic Early Laforte Notables in all our PDF Extended History products and printed products wherever possible.

Laforte Settlers in Canada in the 19th Century