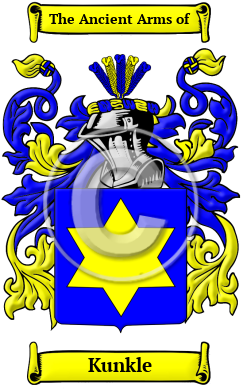 The Kunkle surname is derived from the Middle High German word "kunkel," which meant "spindle." It is thus supposed that the first bearers of this surname were spindle makers in occupation.

Early Origins of the Kunkle family

The surname Kunkle was first found in Bavaria, where the family was anciently associated with the tribal conflicts of the area. Early records show a Dithart Kunkele, in Gieben in 1356, and a bearer of Kunkerl, who was a Pilgrim in 1379. They declared allegiances to many nobles and princes of early history, lending their influence in struggles for power and status within the region. They branched into many houses, and their contributions were sought by many leaders in their search for power.

Early History of the Kunkle family

This web page shows only a small excerpt of our Kunkle research. Another 92 words (7 lines of text) covering the years 1630, 1638, 1693, 1703, 1751, and 1813 are included under the topic Early Kunkle History in all our PDF Extended History products and printed products wherever possible.

Another 38 words (3 lines of text) are included under the topic Early Kunkle Notables in all our PDF Extended History products and printed products wherever possible.

In the United States, the name Kunkle is the 6,030th most popular surname with an estimated 4,974 people with that name. [1]

Kunkle migration to the United States +

Kunkle Settlers in United States in the 18th Century

Kunkle Settlers in United States in the 19th Century

Kunkle Settlers in United States in the 20th Century