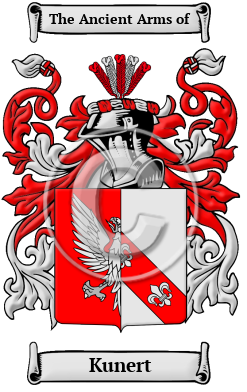 Early Origins of the Kunert family

The surname Kunert was first found in Schleswig, where the family was anciently associated with the political and religious conflicts of the area. The name was most likely formed from Kunrat, the popular first name of a number of medieval German Kaisers. Individual bearers of this name first mentioned in ancient chronicles include Hans Kunat of Goerlitz (c.1417,) and P. Kunet of Liegnitz (c.1491).

Early History of the Kunert family

This web page shows only a small excerpt of our Kunert research. Another 119 words (8 lines of text) covering the years 1790 and 1857 are included under the topic Early Kunert History in all our PDF Extended History products and printed products wherever possible.

More information is included under the topic Early Kunert Notables in all our PDF Extended History products and printed products wherever possible.

Migration of the Kunert family

Some of the first settlers of this family name or some of its variants were: Jacob Kuhnert, who arrived in Philadelphia in 1738; a family by the name of Kuhnert, with two children, arrived in New Orleans in 1838; Anna Rosina Kuhnert sailed to America in 1839.