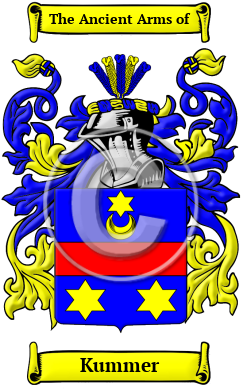 The Kummer surname comes from the Middle High German "kummer," or "kumber," meaning "grief," "distress," or "trouble;" as such, it may have evolved from a nickname for someone who had suffered a loss or misfortune. "Kummer" is also slang word for a penitentiary, and it is possible that in some instances the surname may have arisen as nickname for a prisoner or jailer. There are also places named Kummer in Germany.

Early Origins of the Kummer family

The surname Kummer was first found in Augsburg, an imperial free city in Southern Germany, where an Ulrich Chumber was found in 1288.

Early History of the Kummer family

This web page shows only a small excerpt of our Kummer research. Another 24 words (2 lines of text) covering the years 1329, 1780, 1797, 1852, 1864, and 1879 are included under the topic Early Kummer History in all our PDF Extended History products and printed products wherever possible.

Spelling variations of this family name include: Kummer, Kummerling, Kummerle, Kimmerle and many more.

More information is included under the topic Early Kummer Notables in all our PDF Extended History products and printed products wherever possible.

In the United States, the name Kummer is the 13,022nd most popular surname with an estimated 2,487 people with that name. [1]

Kummer migration to the United States +

Kummer Settlers in United States in the 18th Century

Kummer Settlers in United States in the 19th Century

Historic Events for the Kummer family +