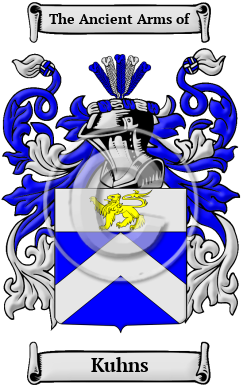 Early Origins of the Kuhns family

The surname Kuhns was first found in Austria, where the family gained a significant reputation for its contributions to the emerging mediaeval society. The name became prominent as many branches of the family founded separate houses and acquired estates in various regions, always elevating their social status by their great contributions to society.

Early History of the Kuhns family

During this period prominent bearers of the name Kuhns were August Kuehnel (1645-c.1700), who was a distinguished German composer and mastered the viola da gamba. Gottlieb Jakob Kuhn...
Another 28 words (2 lines of text) are included under the topic Early Kuhns Notables in all our PDF Extended History products and printed products wherever possible.

In the United States, the name Kuhns is the 5,366th most popular surname with an estimated 4,974 people with that name. [1]

Kuhns migration to the United States +

Kuhns Settlers in United States in the 18th Century

Kuhns Settlers in United States in the 19th Century

Historic Events for the Kuhns family +