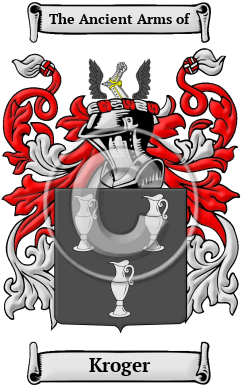 The German state of Saxony, where the distinguished surname Kroger arose, is renowned for both its beauty, industry, and economic power. However, in the medieval era, Germany was fragmented and inhabited by numerous Barbarian tribes, who fought amongst themselves for control of the land. The ancient dukedom of Saxony derived its name from the Germanic tribe name the Saxons who inhabited the territory after the fall of the Roman Empire.

Early Origins of the Kroger family

The surname Kroger was first found in Saxony, where the family was anciently associated with the political and religious conflicts of the area. They declared allegiances to many nobles and princes of early history, lending their influence in struggles for power and status within the region. The family founded numerous branches, many of which acquired manors and estates in surrounding regions, where they contributed to the prosperity of their society.

Early History of the Kroger family

Prominent bearers of the family name Kroger at this time were Peter Krüger or Peter Crüger (1580-1639), German mathematician, astronomer and polymath; and Johann Crüger (1598-1662), a German composer of well-known hymns. He was born April 9, 1598, at Gross-Breese near Guben in Prussia, educated chiefly at the Jesuit college of Olmutz, at the school of poetry at Regensburg, and the university of Wittenberg; in 1622 was appointed cantor at the church of St. Nicolaus at Berlin, a post...
Another 79 words (6 lines of text) are included under the topic Early Kroger Notables in all our PDF Extended History products and printed products wherever possible.

In the United States, the name Kroger is the 18,612nd most popular surname with an estimated 2,487 people with that name. [1]

Kroger migration to the United States +

Kroger Settlers in United States in the 18th Century

Kroger Settlers in United States in the 19th Century

Historic Events for the Kroger family +