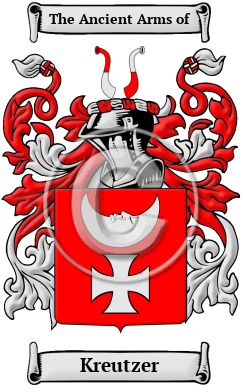 The Kreutzer surname has several possible origins. The "Kreitz" variation of this surname was inspired by the town of Kreitz, which lies near the city of Neuss in northwestern Germany. This type of surname generally arose when an individual moved from one settlement to another, and was then referred to by the name of his place of origin. "Kreitz" may also have been derived from the German word "kreuz," denoting a "cross." The first bearers of the surname might have worked a field or plot of land shaped like a cross, or lived near a prominent cross that served either as a religious symbol or as a boundary-marker (crosses were commonly used for this purpose in the medieval period). It is also thought that the surnames "Kreuz" and "Kreitz" may have come from a sobriquet referring to someone who had served under the banner of the Cross in a Crusade.

Early Origins of the Kreutzer family

The surname Kreutzer was first found in the region of the North Rhine- Westphalia, where members of the Kreutzer family were no doubt integral parts of the Feudal System that became the backbone of early European society.

Early History of the Kreutzer family

This web page shows only a small excerpt of our Kreutzer research. Another 101 words (7 lines of text) covering the years 1753 and 1812 are included under the topic Early Kreutzer History in all our PDF Extended History products and printed products wherever possible.

Spelling variations of this family name include: Kreitz, Kreuz, Kruetz, Kreutzer and others.

More information is included under the topic Early Kreutzer Notables in all our PDF Extended History products and printed products wherever possible.

In the United States, the name Kreutzer is the 18,613rd most popular surname with an estimated 2,487 people with that name. [1]

Kreutzer migration to the United States +

Kreutzer Settlers in United States in the 18th Century

Kreutzer Settlers in United States in the 19th Century

Kreutzer Settlers in Canada in the 18th Century