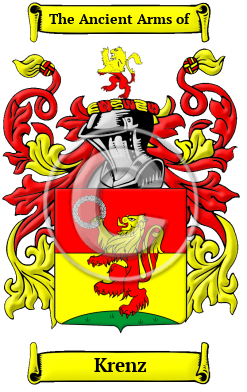 The Krenz surname comes from the Old High German "cranz" meaning "garland" or "wreath," and was most likely originally an occupational name for a wreath maker.

Early Origins of the Krenz family

The surname Krenz was first found in various parts of the Holy Roman Empire. There is a reference from the year 1308 of Berthold Krantz, who was then serving as "Ratsherr" (councilor) in the city of Strassburg. A Johan Crenzelin is on record in 1288 in Worms and a bearer of Krenzelmacherin is on record in Prague in 1403.

Early History of the Krenz family

This web page shows only a small excerpt of our Krenz research. Another 24 words (2 lines of text) covering the year 1583 is included under the topic Early Krenz History in all our PDF Extended History products and printed products wherever possible.

More information is included under the topic Early Krenz Notables in all our PDF Extended History products and printed products wherever possible.

Krenz migration to the United States +

Krenz Settlers in United States in the 19th Century

Krenz Settlers in United States in the 20th Century