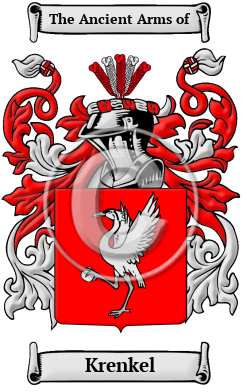 The Krenkel surname is derived from the Middle High German words "kran," or " kron," meaning "crane;" as a name, Krenkel most likely evolved from a nickname, perhaps for a tall, thin crane-like person.

Early Origins of the Krenkel family

The surname Krenkel was first found in Prussia, where the name was an integral part of the feudal society which would shape modern European history. Many prominent branches of the family would strive to make this name renowned as they contributed to the social, economic and political affairs of the region.

Early History of the Krenkel family

This web page shows only a small excerpt of our Krenkel research. Another 97 words (7 lines of text) covering the years 1297, 1618, and 1819 are included under the topic Early Krenkel History in all our PDF Extended History products and printed products wherever possible.

Notable figures of the time with the name Krenkel were J. Cron, who was recorded in Hamburg in 1297. This is a particularly important record as surnames in German states were in their...
Another 32 words (2 lines of text) are included under the topic Early Krenkel Notables in all our PDF Extended History products and printed products wherever possible.

Migration of the Krenkel family