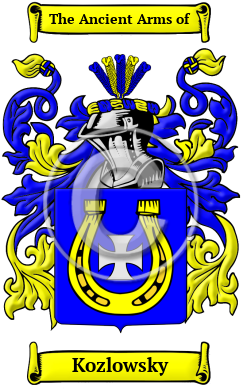 The name Kozlowsky is a proud emblem of the ancient Polish homeland. Over the course of its history, the boundaries of Poland changed frequently and Polish names have much in common with other Slavic names in the way they are formed. Polish surnames often end with a diminutive suffix, such as -owicz, ak, ski or ska. While the "patronymic" surname, which is derived from the name of the father, is the most common form of a hereditary surname in the Poland; there are also "occupational" surnames. An occupational type of surname, the family name Kozlowsky is derived from the occupation of goat herd. This name is a derivative of the word koza which means goat and, since this used to be a rather common profession, there were many bearers of the name. In fact, Kozlowsky is one of the most common surnames in contemporary Poland.

Spelling variations of this family name include: Kozlovski, Kozlovsky, Kozlowski, Kozlowsky and others.

Kozlowsky migration to the United States +

Kozlowsky Settlers in United States in the 19th Century

Historic Events for the Kozlowsky family +