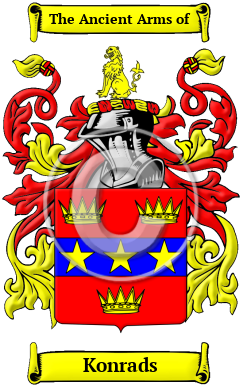 The origin of the proud surname Konrads can be traced to the historic kingdom of Bohemia, which is now part of Czechoslovakia. German surnames developed at a time when most of Bohemia, and most of the German provinces, were states of the Holy Roman Empire. At first people used only a single name, but as the population grew and people began to travel, they began to find it necessary to take on an additional name to differentiate themselves. The surname Konrads originates from the Old German emperor's name, Kunrad, meaning "kuehn im Rat" (bold in counsel).

Early Origins of the Konrads family

The surname Konrads was first found in Bohemia, where the family is considered to have made a great early contribution to the feudal society which became the backbone of early development of Europe. The family became prominent in local affairs and branched into many houses which played important roles in the savage tribal and national conflicts, each group seeking power and status in an ever changing territorial profile. The name originates from the Old German emperor's name, Kunrad, meaning "kuehn im Rat" (bold in counsel).

Early History of the Konrads family

During this early period, notable bearers of the name Konrads included Carl Signified Kunrad von Loewenthal, who was a prominent and honored Bohemian knight. He was granted the knighthood in 1711. Johann Georg Conradi was chapel-master at Oettingen in Bavaria towards the end of the 17th century, one of the earliest composers of German...
Another 54 words (4 lines of text) are included under the topic Early Konrads Notables in all our PDF Extended History products and printed products wherever possible.

Migration of the Konrads family

Some of the first settlers of this family name or some of its variants were: Johnnies Conrads, who settled in Germantown, Pennsylvania in 1683Matthew and Anna Conrad, who came to New York City in 1709; Hags Leond Conraad, who arrived in Philadelphia in 1732.