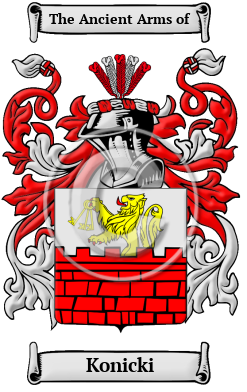 Early Origins of the Konicki family

The surname Konicki was first found in Stanislawow, a south eastern province of Poland in the Carpathian area. Mostly populated by Ruthenians (70%) there are only 22% Poles, the rest mostly Jews. There are many resorts in this beautiful province and the chief towns are Stanislawow, Stryj, Kolmyja, Kalusz and Halicz, the latter being famous for a line of Russian princes which became extinct in 1340. There are oilfields in the area, and the province is famous for its horses. The surname became noted for its many branches in the region, each house acquiring a status and influence which was envied by the princes of the region. In their later history the name became a power unto themselves and were elevated to the ranks of nobility as they grew into this most influential family.

Early History of the Konicki family

More information is included under the topic Early Konicki Notables in all our PDF Extended History products and printed products wherever possible.

Migration of the Konicki family

Some of the first settlers of this family name or some of its variants were: Stefan Kionka who emigrated to Texas in 1905.