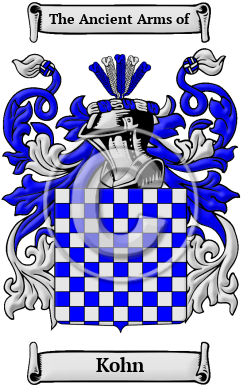 A multitude of prestigious family names, such as the surname Kohn, were formed in the lands which became the modern German state of Prussia, known for its beauty, industry and military power. The name originated as a short form of the personal name Konrad, an Old German emperor's name.

Early Origins of the Kohn family

The surname Kohn was first found in West Prussia, where the family emerged in mediaeval times as one of the notable families of the region. From the 13th century the surname was identified with the great social and economic evolution which made this territory a landmark contributor to the development of the nation. The name originated as a short form of Konrad, an Old German emperor's name.

Early History of the Kohn family

This web page shows only a small excerpt of our Kohn research. Another 189 words (14 lines of text) covering the years 1554, 1806, 1837, 1842, and 1869 are included under the topic Early Kohn History in all our PDF Extended History products and printed products wherever possible.

Notable figures of the period with the name Kohn were members of the Koehn von Jaski family, who distinguished themselves in politics and military services. One Koehn von Jaski, the Lord of Wittichwalde, became the director of regional affairs (Landes-Director) and regional advisor for the district of Mohrungen in 1806, while...
Another 50 words (4 lines of text) are included under the topic Early Kohn Notables in all our PDF Extended History products and printed products wherever possible.

Kohn migration to the United States +

Kohn Settlers in United States in the 18th Century

Kohn Settlers in United States in the 19th Century

Kohn Settlers in Australia in the 19th Century

Kohn Settlers in New Zealand in the 19th Century

Historic Events for the Kohn family +