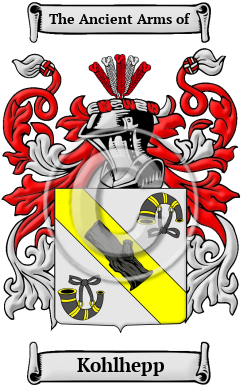 The origins of the proud surname Kohlhepp can be traced to the historic kingdom of Bohemia, which is now part of Czechoslovakia. In the Middle Ages, Bohemia was a part of the Holy Roman Empire, which was characterized by the Feudal System. Before this era, people were known only by a single name. However, as the population increased and travelers set out on their journeys, it became necessary for people to adopt a second name to identify themselves. Many people, such as the Kohlhepp family, adopted the name of their feudal occupation as their surname. However, an occupational name did not become a hereditary surname until the office or type of employment became hereditary. The Kohlhepp name derives from the Old German word "cholo," which meant "cabbage;" the surname was an occupational name for a person who grew or sold cabbages.

Early Origins of the Kohlhepp family

The surname Kohlhepp was first found in Bohemia, where the family became noted for its many branches within the region, many houses acquiring a status and influence which rivaled that of the landed aristocracy. In their later history some branches were elevated to the ranks of nobility as they distinguished themselves through their contributions to the social, political, and economic developments of the nation. The literal meaning of this name is "cabbage" and thus "cabbage farmer," and is to be differentiated from the name Kohler or Koehler, which means "coal miner."

Early History of the Kohlhepp family

This web page shows only a small excerpt of our Kohlhepp research. Another 354 words (25 lines of text) covering the years 1548, 1594, 1598, 1777, and 1816 are included under the topic Early Kohlhepp History in all our PDF Extended History products and printed products wherever possible.

Another 31 words (2 lines of text) are included under the topic Early Kohlhepp Notables in all our PDF Extended History products and printed products wherever possible.

Migration of the Kohlhepp family

Some of the first settlers of this family name or some of its variants were: Johann Kohl, who left the Palatinate for England in 1709. Anna Barbara, Luis, Margaretha, and Nicolas Kohl all settled in South Carolina in 1732; while Nicolas Kohle came to America in 1777 and Gottlieb Kohle settled in Allegany County in 1853..