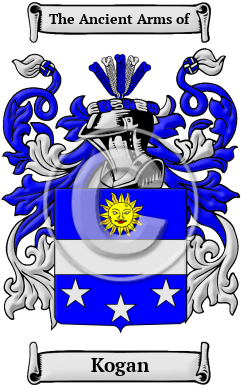 The distinguished surname Kogan is a proud sign of an ancient Jewish culture. The surname Kogan is an occupational surname for a priest, and it comes from the Hebrew word kohen. Traditionally, priests were considered to have been members of a hereditary caste, descended from Aaron, the brother of Moses. Not all Jewish bearers of the surname Kogan belong to this caste, however. When many Jews were being forced to join the Russian Army for a term of 25 years, a number of them changed their last name to Kogan, because members of the clergy were exempt from service.

In the United States, the name Kogan is the 16,869th most popular surname with an estimated 2,487 people with that name. [1]

Kogan migration to the United States +

Kogan Settlers in United States in the 17th Century

Kogan Settlers in United States in the 19th Century