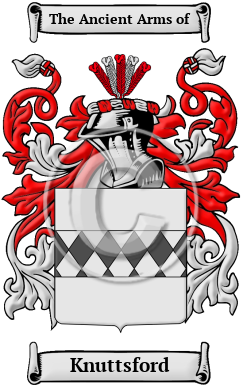 Early Origins of the Knuttsford family

The surname Knuttsford was first found in Cheshire at Knutsford, a town and parish in the union of Altrincham, E. division of the hundred of Bucklow. The origin of the place name is indeed interesting. One reference sites that as the place was once situated "on the banks of a small stream, across which was formerly a ford. Canute, the Dane, is said to have passed over the ford with his army for the conquest of the northern parts of the kingdom, in the reign of Ethelred I., or that of Edmund Ironside; and it may thence have been called Canute's Ford." [1] However, other references claim that the place name is originally "spelt Knotsford; according to tradition, several generations of the name of Knott had a mill on the stream, and as the working of the mill mainly regulated the depth of water at the ford, the place was called after them Knot's ford." By the time of the Domesday Book of 1086, it was listed as Cunformed, part of the barony of Halton. [2]

Early History of the Knuttsford family

The first dictionaries that appeared in the last few hundred years did much to standardize the English language. Before that time, spelling variations in names were a common occurrence. The language was changing, incorporating pieces of other languages, and the spelling of names changed with it. Knuttsford has been spelled many different ways, including Knotsford, Knottsford, Knutford, Knutsford, Knottsford, Knottesford, Notsford, Nottsford, Nutsford, Nuttsford, Knotford, Knottford, Notford and many more.

More information is included under the topic Early Knuttsford Notables in all our PDF Extended History products and printed products wherever possible.

Migration of the Knuttsford family

Thousands of English families in this era began to emigrate the New World in search of land and freedom from religious and political persecution. Although the passage was expensive and the ships were dark, crowded, and unsafe, those who made the voyage safely were rewarded with opportunities unavailable to them in their homeland. Research into passenger and immigration lists has revealed some of the very first Knuttsfords to arrive in North America: the name represented in many forms and recorded from the mid 17th century in the great migration from Europe. Migrants settled in the eastern seaboard from Newfoundland, to Maine, to Virginia, the Carolinas, and to the islands..