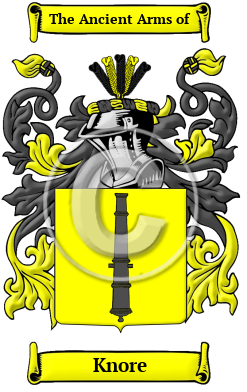 The surname Knore is a name that originated in Thuringia, which is located between Hessen and Lower Saxony in the west and Saxony in the east. By and large, hereditary surname were formed in Germany when areas of Thuringia, and most of the German states, were a part of the Holy Roman Empire. At this time, as the population of Europe swelled and travel became easier, people began to encounter others sharing their own name and they avoided confusion by adopting a second name. A common form of surname found in Thuringia are those that are derived from nicknames. Nickname surnames were derived from an eke-name, or added name. They usually reflected the physical characteristics or attributes of the first person that used the name. The surname Knore was a name for a hunchback. The distinguished name Knore is derived from the German word "knorre," which means "lump" or "outgrowth."

Early Origins of the Knore family

The surname Knore was first found in Thuringia, where the name could be considered to have made a great contribution to the feudal society which became the backbone of modern Europe. The name became prominent in local affairs and branched into many houses which played important roles in the local and national conflicts in which groups sought power and status in an ever changing territorial profile.

Early History of the Knore family

Notable members of the surname Knore in this period were Christian Knorr von Rosenroth (1636-1689), an alchemist who wrote religious poems, one of which is still well known today. Iwan Knorr (1853-1916)...
Another 32 words (2 lines of text) are included under the topic Early Knore Notables in all our PDF Extended History products and printed products wherever possible.

Knore migration to the United States +

Knore Settlers in United States in the 17th Century