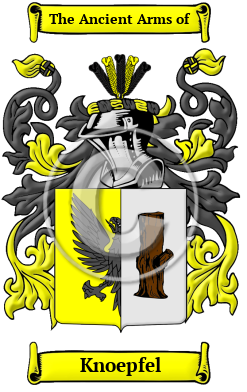 The history of the Knoepfel family dates back to the 12th century, when hereditary surnames first began to be used in Germany. The name Knoepfel comes from Bavaria, and is derived from the Old German word "Knopf," meaning "button"; thus, it is a name for a maker of buttons, usually of horn.

Early Origins of the Knoepfel family

The surname Knoepfel was first found in Bavaria, where this family made important contributions toward the development of this district from ancient times. Ancient chronicles first mention the knight Johann Knop of Thuringia in 1368, Michel Knoepfle of Ravensburg in 1476, and Knoepfelman of Speyer in 1334.

Early History of the Knoepfel family

This web page shows only a small excerpt of our Knoepfel research. Another 112 words (8 lines of text) covering the years 1480, 1728, 1769, 1842, 1874, and 1895 are included under the topic Early Knoepfel History in all our PDF Extended History products and printed products wherever possible.

In the medieval era, many different cultural groups lived in the German states. There are thus many regional variations of German surnames from that era. Westphalians spoke Low German, which is similar to modern Dutch. Many German names carry suffixes that identify where they came from. Others have phrases attached that identify something about the original bearer. Other variations in German names resulted from the fact that medieval scribes worked without the aid of any spelling rules. The spelling variations of the name Knoepfel include Knopfler, Knopf, Knopfle, Knoepfel, Knoepfle, Knoepfli, Knoepfler, Knoff, Knof, Knofler, Knoffler, Knopfer, Knop, Knopler, Knauff, Knauffer, Knauffel and many more.

Another 38 words (3 lines of text) are included under the topic Early Knoepfel Notables in all our PDF Extended History products and printed products wherever possible.

Migration of the Knoepfel family

Thousands of German settlers came to North America between the mid-17th and mid-20th centuries. The hardships of the long voyage were balanced by the opportunity to escape poverty and religious persecution. The descendents of these settlers still populate the states of Pennsylvania, Texas, New York, Illinois, and California. Many also live in Ontario and the prairie provinces of Canada. An inquiry into the early roots of North American families has revealed a number of immigrants bearing the name Knoepfel or a variant listed above: Katrena Knop, who settled in Pennsylvania in 1731; Peter Knop, who settled in Pennsylvania in 1735; Heinrich Knopf, who sailed to America in 1779; Barbara Knauff, who immigrated to Baltimore in 1831.