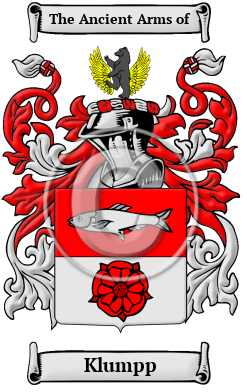 The roots of the distinguished German surname Klumpp lie in the former duchy of Swabia. The name is of nickname origin, and means "lump" or "clumsy, crude, fat person." The name was most likely initially bestowed as a nickname on someone who possessed these characteristics, or in an ironic way on someone who possessed the opposite characteristics, and the name then evolved from nickname to surname.

Early Origins of the Klumpp family

The surname Klumpp was first found in Swabia, where it most likely first emerged. The earliest known bearer of the name was Dilmann dictus Clump, who was a resident of the Swabian town of Hargarten in 1297. Some of the family trace back to the town of Chlum an der Cydlina in the former Austrian kingdom of Bohemia situated almost in the heart of Germany.

Early History of the Klumpp family

This web page shows only a small excerpt of our Klumpp research. Another 103 words (7 lines of text) covering the years 1297, 1256, 1319, 1624, 1785 and 1852 are included under the topic Early Klumpp History in all our PDF Extended History products and printed products wherever possible.

Spelling variations of this family name include: Klump, Klumpp, Klumb, Klumpb, Klumpf and others.

Another 38 words (3 lines of text) are included under the topic Early Klumpp Notables in all our PDF Extended History products and printed products wherever possible.

Klumpp migration to the United States +

Klumpp Settlers in United States in the 19th Century