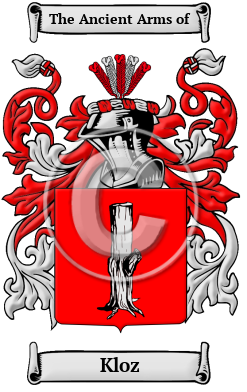 The ancient and distinguished German surname Kloz is derived from the old Germanic term "Klotz," meaning "awkward, clumsy." The name was most likely initially bestowed as a nickname, either on someone who was clumsy or in an ironic way on someone who was exceptionally graceful.

Early Origins of the Kloz family

The surname Kloz was first found in Hessen, where the family was closely identified in the early period of history with the feudal society which would become prominent throughout Europe. The Klozes would later emerge as an influential noble family, having many distinguished branches, and well known for their involvement in social, economic and political affairs. The earliest known bearer of the name was Berchtolt Klotz, who is registered in the "Furstenbergisches Urkundenbuch" in 1343.

Early History of the Kloz family

Another 32 words (2 lines of text) are included under the topic Early Kloz Notables in all our PDF Extended History products and printed products wherever possible.

Kloz Settlers in Australia in the 19th Century