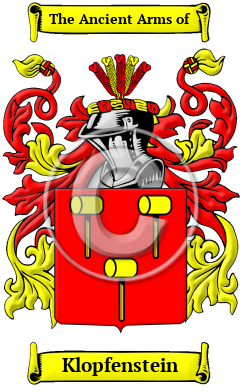 Early Origins of the Klopfenstein family

The surname Klopfenstein was first found in Holland, where the name became noted for its many branches in the region, each house acquiring a status and influence which was envied by the princes of the region. The name was first recorded in Amsterdam, an ancient 13th century town held by the Lords of Amstel. Giesebrecht II built a castle there. Geisbrecht III built the dam to keep out the sea. It is first mentioned in charters of 1275 when Floris IV, the count of Holland granted its charter. It became a city of great mercantile wealth. It holds great treasures of art. In their later history the surname became a power unto themselves and were elevated to the ranks of nobility as they grew into a most influential family. They were originally of Bucquoy in ancient times but when they moved from France and assumed the style of de Klopper. The name also branched into the province of Haarlem.

Early History of the Klopfenstein family

This web page shows only a small excerpt of our Klopfenstein research. Another 52 words (4 lines of text) are included under the topic Early Klopfenstein History in all our PDF Extended History products and printed products wherever possible.

More information is included under the topic Early Klopfenstein Notables in all our PDF Extended History products and printed products wherever possible.

Klopfenstein migration to the United States +

Klopfenstein Settlers in United States in the 18th Century

Klopfenstein Settlers in United States in the 19th Century

Klopfenstein Settlers in United States in the 20th Century

Klopfenstein Settlers in Canada in the 19th Century