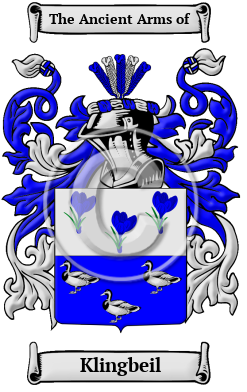 The surname Klingbeil is a local surname; more specifically, it is a topographical surname, derived from a feature of the physical geography near where the original bearer lived or held land. Checking further we found the name was derived from the Old German word for ravine or gorge.

Early Origins of the Klingbeil family

The surname Klingbeil was first found in Swabia, where this family made important contributions toward the development of this district from ancient times. Always prominent in social and political affairs, the family formed alliances with other families within the Feudal System and the nation. Individual bearers of this name first mentioned in ancient chronicles include Hugo der Clingere of Breisgau (c.1200,) Heydeke bei dem Clinghe of Quedlinburg in the Harz Mountains (c.1300,) Clingeler of Wuerttemberg (c.1283,) and Heincz in der Clingen of Wuerzburg (c.1409).

Early History of the Klingbeil family

This web page shows only a small excerpt of our Klingbeil research. Another 186 words (13 lines of text) covering the years 1752, 1812, and 1831 are included under the topic Early Klingbeil History in all our PDF Extended History products and printed products wherever possible.

Another 44 words (3 lines of text) are included under the topic Early Klingbeil Notables in all our PDF Extended History products and printed products wherever possible.

In the United States, the name Klingbeil is the 16,870th most popular surname with an estimated 2,487 people with that name. [1]

Klingbeil migration to the United States +

Klingbeil Settlers in United States in the 19th Century