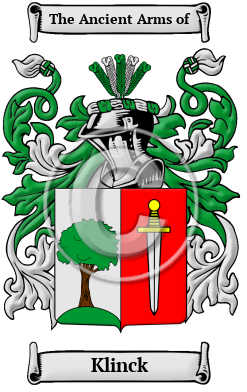 The distinguished German surname Klinck comes from the northern province of Schleswig-Holstein, and has several possible origins. Firstly, the name may be derived from the German word "kling," meaning "moving stream, valley, or gorge"; in this case, the name would have been originally borne by someone who dwelt near a rushing stream or ravine. Alternatively, the surname may be derived from a place name; the original bearer of the name may have been someone who moved from the city of Klink in Mecklenburg to the Schleswig-Holstein region.

Early Origins of the Klinck family

Early History of the Klinck family

This web page shows only a small excerpt of our Klinck research. Another 144 words (10 lines of text) covering the years 1286, 1324, 1461, 1474, 1787, and 1860 are included under the topic Early Klinck History in all our PDF Extended History products and printed products wherever possible.

Spelling variations of this family name include: Klink, Klinke, Klinck, Klincke, Kling, Klinge and others.

Another 41 words (3 lines of text) are included under the topic Early Klinck Notables in all our PDF Extended History products and printed products wherever possible.

Klinck migration to the United States +

Klinck Settlers in United States in the 18th Century

Klinck Settlers in United States in the 19th Century