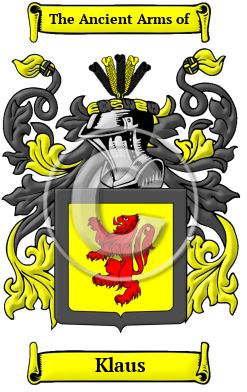 The roots of the Klaus family are found in the ancient German state of Bavaria. Klaus is one of the most common styles of German surname, that of patronymics and matronymics - names derived from the given names of the father or mother of their original bearers. Klaus is derived from the medieval given name Klaus, which is a shortened form of the personal name Niklaus or Nicholas. The given name Nicholas, which means people's victory, was popular among Christians throughout Europe in the Middle Ages.

Early Origins of the Klaus family

The surname Klaus was first found in Bavaria, where the family contributed greatly to the development of an emerging nation and would later play a large role in the political conflicts of the area. The family branched into many houses, many of which acquired estates and manors throughout the surrounding regions, where they played significant roles in the social and political affairs.

Early History of the Klaus family

Many cultural groups lived in the German states in medieval times. Each had its own dialect and traditions, and unique variations of popular names. Low German, which is similar to contemporary Dutch, was spoken in Westphalia. German names are characterized by additions such as regional suffixes and phrases that tell something about the origin or background of its original bearer. Further contributing to the variation in German names was the fact that there were no spelling rules in medieval times: scribes recorded names according to their sound. The recorded spelling variations of Klaus include Klaus, Klauss, Claus, Clauss, Klauhs, Clauhs, Klausing (Westphalia), Klauser (Switzerland), Clausing, Clauser, Klausen, Klaussen, Clausen and many more.

Prominent among members of the name Klaus in this period include John Closterman (1656-1713), portrait-painter, born at Osnaburg, Hanover, in 1656, the son of an artist, who taught him the rudiments of design. "In 1679 he went to...
Another 38 words (3 lines of text) are included under the topic Early Klaus Notables in all our PDF Extended History products and printed products wherever possible.

In the United States, the name Klaus is the 6,911st most popular surname with an estimated 4,974 people with that name. [1]

Klaus migration to the United States +

German settlers were among the most common to come to North America between the mid-17th and mid-20th centuries. Poverty and religious persecution drove many Bavarians to make this long trek. tenant farmers were also enticed by the prospect of owning land. From east to west, these German immigrants populated the United States, settling in Pennsylvania, Texas, New York, Illinois, and California. Ontario and the prairie provinces of Canada also provided homes to many. Early settlers bearing the Klaus surname or a spelling variation of the name include:

Klaus Settlers in United States in the 18th Century

Klaus Settlers in United States in the 19th Century

Klaus Settlers in New Zealand in the 19th Century

Historic Events for the Klaus family +