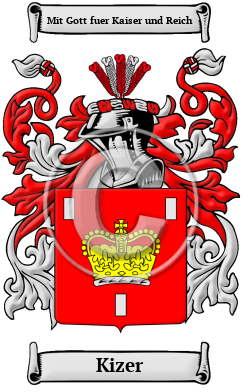 Early Origins of the Kizer family

The surname Kizer was first found in Austria, where the name was closely identified in early mediaeval times with the feudal society which would become prominent throughout European history. The name would later emerge as a noble family with great influence, having many distinguished branches, and become noted for its involvement in social, economic and political affairs.

Early History of the Kizer family

Many cultural groups lived in the German states in medieval times. Each had its own dialect and traditions, and unique variations of popular names. Low German, which is similar to contemporary Dutch, was spoken in Westphalia. German names are characterized by additions such as regional suffixes and phrases that tell something about the origin or background of its original bearer. Further contributing to the variation in German names was the fact that there were no spelling rules in medieval times: scribes recorded names according to their sound. The recorded spelling variations of Kizer include Kaiser, Kaisser, Kaizer, Kayser, Kaysser, Kayzer, Keiser, Keyser, Keisser, Keizer, Kaisling, Kaissling, Keyserling and many more.

During this period prominent bearers of the name Kizer were Pieter de Keyser (c.1595-1676), a Dutch Golden Age architect and sculptor; Reinhard Keiser (1674-1739), German composer; and Friedrich Kaiser (1814-1874), the son of an Austrian...
Another 34 words (2 lines of text) are included under the topic Early Kizer Notables in all our PDF Extended History products and printed products wherever possible.

In the United States, the name Kizer is the 5,663rd most popular surname with an estimated 4,974 people with that name. [1]

Migration of the Kizer family

Austria was made a republic after the First World War. The Austro-Hungarian Empire was broken up by the Treaty of Versailles and many of its people found themselves in the new nation of Czechoslovakia. Many other Austrians and expatriate Austrians made their way to North America in the 20th century. Most landed in Philadelphia, later continuing on to the states of Ohio, Texas, Illinois, California, New York, and Maryland. Some Austrian settlers also went to western Canada and Ontario. Research into the origins of individual families in North America revealed records of the immigration of a number of people bearing the name Kizer or a variant listed above: Peter Keyser, who came to Germantown, Pennsylvania in 1683; and Dirk Keyser, who arrived there in 1691. They were followed by Georg Friedrich Keyser and Johann Keyser, who came in 1709-10. Jerick Kaiser came to Philadelphia in 1740.