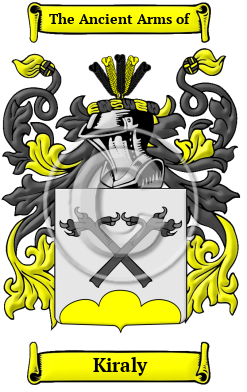 The name is derived from the Middle high German word "krol," meaning "curly."

Early Origins of the Kiraly family

The surname Kiraly was first found in Prussia where the family made a considerable contribution to the feudal society which shaped modern Europe. The family branched into several houses, all of which played an important role in the local political conflicts which forged the nation.

Early History of the Kiraly family

This web page shows only a small excerpt of our Kiraly research. Another 40 words (3 lines of text) covering the years 1563, 1609, 1797, 1848 and 1837 are included under the topic Early Kiraly History in all our PDF Extended History products and printed products wherever possible.

Spelling variations of this family name include: Krol, Krolls, Krols, Croll, Krole and others.

Another 49 words (4 lines of text) are included under the topic Early Kiraly Notables in all our PDF Extended History products and printed products wherever possible.

Migration of the Kiraly family