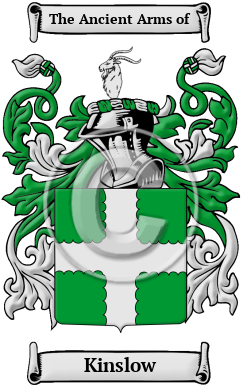 The Norman Conquest of England in 1066 added many new elements to an already vibrant culture. Among these were thousands of new names. The Kinslow family lived in one of the places called Kingsley in Cheshire or Staffordshire having derived from the Old English word cyningesleah, which means wood or clearing of the king. [1] Thus, Kinslow is a classic example of an English polygenetic surname, which is a surname that was developed in a number of different locations and adopted by various families independently.

Early Origins of the Kinslow family

The surname Kinslow was first found in Cheshire where a "township and estate, the property of Sir Ranulph de Kingsley before 1128 was found. In the XVIII century the family divided into two branches, the younger continuing the name of Kingsley, the elder adopting that of De Aula or Hale." [2] Another early listing of the name was Adam de Kyngeslegh who was listed in East Cheshire. [3] Kingsley is a township, civil parish and a village in the parish of Frodsham, union of Runcorn. [4] It was first listed in the Domesday Book of 1086 as Chingeslie. [5]

One of the first records of the family was Kynsige, Kinsius, Kinsi or Cynesige (d. 1060), Archbishop of York "who, it is said, was brought into the world by a Caesarean operation." [6]

Early History of the Kinslow family

This web page shows only a small excerpt of our Kinslow research. Another 86 words (6 lines of text) are included under the topic Early Kinslow History in all our PDF Extended History products and printed products wherever possible.

Norman surnames are characterized by a multitude of spelling variations. The frequent changes in surnames are largely due to the fact that the Old and Middle English languages lacked definite spelling rules. The introduction of Norman French to England, as well as the official court languages of Latin and French, also had pronounced influences on the spelling of surnames. Since medieval scribes and church officials recorded names as they sounded, rather than adhering to any specific spelling rules, it was common to find the same individual referred to with different spellings. The name has been spelled Kingsley, Kingsleigh, Kingslee, Kinsey and others.

More information is included under the topic Early Kinslow Notables in all our PDF Extended History products and printed products wherever possible.

In the United States, the name Kinslow is the 9,675th most popular surname with an estimated 2,487 people with that name. [7]

Kinslow Settlers in Australia in the 19th Century