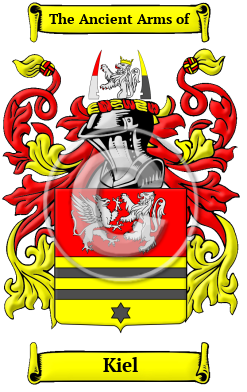 Although the early records of this surname come from Southern Germany, the name itself is thought to come from the place name Kiel in Holstein, a former duchy in northern Germany.

Early Origins of the Kiel family

The surname Kiel was first found in Baden, where the name was anciently associated with the tribal conflicts of the area. There are record of bearers of von Kile and Kileman in Lübeck in the year 1300. There was one family originally seated at Kielmanseck in Wurtemburg where they were confirmed as nobles in 1578.

Early History of the Kiel family

Another 28 words (2 lines of text) are included under the topic Early Kiel Notables in all our PDF Extended History products and printed products wherever possible.

Kiel migration to the United States +

Kiel Settlers in United States in the 18th Century

Kiel Settlers in United States in the 19th Century