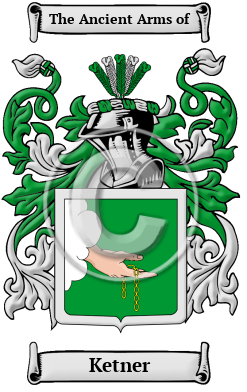 The roots of the distinguished German surname Ketner lie in the kingdom of Bavaria. The name is derived from the German word "kette," meaning "chain," and was most likely originally borne by someone who made and sold chains.

Early Origins of the Ketner family

The surname Ketner was first found in cities near the Czechoslovakian border. The earliest recorded bearer of the name was Conrad der Ketner, who lived in the town of Eger in 1340. The young Ketner family was instrumental during this early period, playing a major role in the development of the region's society.

Early History of the Ketner family

Spelling variations of this family name include: Kettner, Ketner, Ketener, Kettener and others.

Another 33 words (2 lines of text) are included under the topic Early Ketner Notables in all our PDF Extended History products and printed products wherever possible.

In the United States, the name Ketner is the 16,119th most popular surname with an estimated 2,487 people with that name. [1]

Migration of the Ketner family

Some of the first settlers of this family name or some of its variants were: Feronica Kettner, who settled in Pennsylvania in 1733; Martin Ketner, who immigrated to Nova Scotia in 1752; Franz Kettner, who came to Texas in 1848.