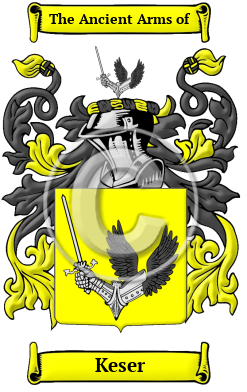 The roots of the distinguished German surname Keser lie in the former duchy of Swabia. The name is derived from the Middle High German word "kaeser," denoting a person who made and sold cheese.

Early Origins of the Keser family

The surname Keser was first found in Swabia, where it is believed to have first emerged, initially borne by dairy farmers and cheesemongers. The earliest documented instance of the name has been traced to this region, where Arnold Chesere was recorded to have lived in 1246. The young Keser family was instrumental during this early period, playing a major role in the development of medieval Swabian society.

Early History of the Keser family

Another 30 words (2 lines of text) are included under the topic Early Keser Notables in all our PDF Extended History products and printed products wherever possible.

Migration of the Keser family

Some of the first settlers of this family name or some of its variants were: Barbara Kaser, who was contracted out as a servant in Philadelphia in 1817; Louis Kaser, who applied for naturalization in Missouri in 1840; Jacob Keese, who arrived in San Francisco in 1852.

Historic Events for the Keser family +