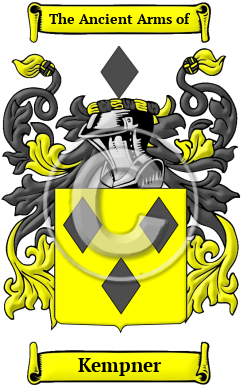 The distinguished Kempner family emerged in Pomerania, a territory of Germany and a maritime province of Prussia. Pomerania was bounded on the south by Brandenburg, on the west by Mecklenburg, and on the east by Poland. During the 5th century, Pomerania was settled by Pommern, who were a Slavic tribe. Pommern, which means on the sea, became the name of this region during the reign of the Charlemagne.

Early Origins of the Kempner family

The surname Kempner was first found in Pomerania, where the family contributed greatly to the development of an emerging nation and would later play a large role in the political conflicts of the area. The family branched into many houses, many of which acquired estates and manors throughout the surrounding regions, where they played significant roles in the social and political affairs. Individual bearers of the name first mentioned in ancient chronicles include Herward Kempe of Rostock, Pomerania who lived in the year 1257.

Early History of the Kempner family

This web page shows only a small excerpt of our Kempner research. Another 328 words (23 lines of text) covering the years 1658, 1679, 1680, 1816, and 1833 are included under the topic Early Kempner History in all our PDF Extended History products and printed products wherever possible.

More information is included under the topic Early Kempner Notables in all our PDF Extended History products and printed products wherever possible.

Kempner migration to the United States +

Kempner Settlers in United States in the 19th Century