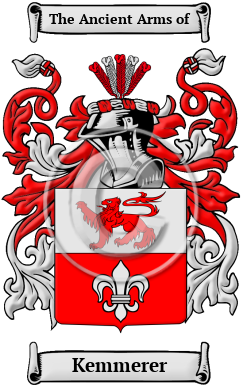 The surname Kemmerer is an occupational surname. Further research revealed that the name is derived from the Old German word "kämmerer," which means "chamberlain." A chamberlain was the person in charge of the noble household; to him would fall the duty of ensuring that the castle and court of the noble ran smoothly. This is a surname of office, a subset of the larger set of occupational names.

Early Origins of the Kemmerer family

The surname Kemmerer was first found in Swabia, where this family name became a prominent contributor to the development of the district from ancient times. Literally the name refers to the courtly administrative position of chamberlain.

Early History of the Kemmerer family

This web page shows only a small excerpt of our Kemmerer research. Another 162 words (12 lines of text) covering the years 1148, 1346, 1796, and 1833 are included under the topic Early Kemmerer History in all our PDF Extended History products and printed products wherever possible.

Notables with the surname Kemmerer during this period were Jacob Friedrich Kammerer (b.1796), descendant of a line of prominent sieve makers around Stuttgart, who was one of the colorful figures of his time. He was self-taught in Greek, Latin, and chemistry, and was a talented player of the flute, clarinet, and piano. He was popularly known as the inventor of the phosphorescent match stick. In 1833 he was sentenced to two years imprisonment for taking part in the Frankfurt revolution. He escaped to Strassburg, where he built a silk hat factory. In Zurich he built a variety of factories producing match...
Another 117 words (8 lines of text) are included under the topic Early Kemmerer Notables in all our PDF Extended History products and printed products wherever possible.

In the United States, the name Kemmerer is the 14,277th most popular surname with an estimated 2,487 people with that name. [1]

Kemmerer migration to the United States +

Kemmerer Settlers in United States in the 18th Century

Kemmerer Settlers in United States in the 19th Century