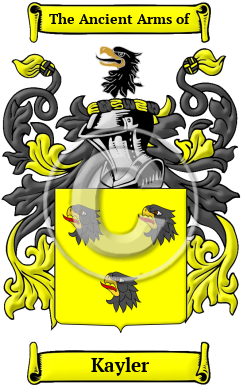 The Kayler family emerged in the ancient duchy of Swabia, which was in the southwest of Germany. Before the late Middle Ages, German people were known only by a single name. However, as populations increased and people began to travel more, it became necessary to adopt a second name. Many people, such as the Kayler family, adopted the name of their feudal occupation as their surname. The name Kayler is derived from the Middle High German word "kelner," which corresponds to the English occupation of steward. The kelner was the manager of the noble household.

Early Origins of the Kayler family

The surname Kayler was first found in Swabia, where the family contributed greatly to the development of an emerging nation and would later play a large role in the political conflicts of the area. The family branched into many houses, many of which acquired estates and manors throughout the surrounding regions, where they played significant roles in the social and political affairs. Individual bearers of this name first mentioned in ancient chronicles include Herman der Kelner (Keller) of Rottweil, Wuerttemberg, in 1314.

Early History of the Kayler family

Another 31 words (2 lines of text) are included under the topic Early Kayler Notables in all our PDF Extended History products and printed products wherever possible.

Migration of the Kayler family

Some of the first settlers of this family name or some of its variants were: Jacob Kelner, who came to Germantown, Pennsylvania, in 1683. Johannes and Eva Maria Keler arrived together in Philadelphia in 1737. Bernard Keller settled in Carolina or Pennsylvania in 1743.