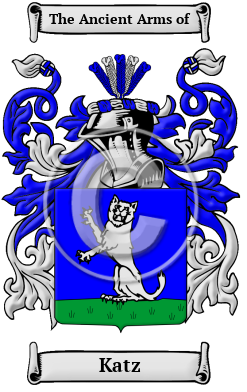 The prestigious surname Katz is a symbol of the Jewish culture, which has been found in many places all over the world. In the Middle Ages, most people were known only by one name. As people began to settle closer to one another in towns and cities, it became more important to be able to identify people. As such, hereditary surnames arose. The surname Katz is an occupational surname, which comes from the Hebrew phrase "kohen Tsedek," which means "priest of righteousness."

Spelling variations of this family name include: Katch and others.

Katz migration to the United States +

Katz Settlers in United States in the 18th Century

Katz Settlers in United States in the 19th Century

Katz Settlers in United States in the 20th Century

Historic Events for the Katz family +

Suggested Readings for the name Katz +