The distinguished surname Kappel comes from Austria, and is of two possible origins. Firstly, the name is derived from the Austrian term "Chaepplingaern," meaning "people living next to a chapel." Alternatively, the name may be derived from the place name "Caplendorf," the name of an Austrian village. Either of these origins would indicate the place of residence of the original bearer. 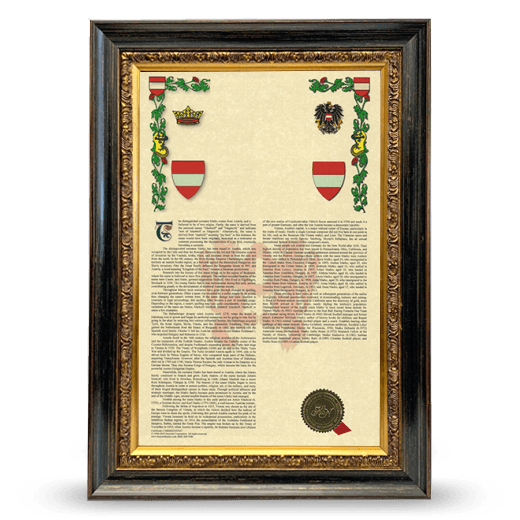 Early Origins of the Kappel family

The surname Kappel was first found in Austria, where it first emerged in the early Middle Ages. The first known bearer of the name was one known as bi der Chappel ("near the chapel",) who lived in Regensburg in 1272. The young Kappel family was instrumental during this early period, playing a major role in the development of medieval Austrian society.

Early History of the Kappel family

This web page shows only a small excerpt of our Kappel research. Another 75 words (5 lines of text) covering the years 1487, 1685, 1733, 1769, 1792, and 1871 are included under the topic Early Kappel History in all our PDF Extended History products and printed products wherever possible.

Spelling variations of this family name include: Kappel, Kappelmann, Kappler, Käppel and many more.

Another 40 words (3 lines of text) are included under the topic Early Kappel Notables in all our PDF Extended History products and printed products wherever possible.

In the United States, the name Kappel is the 13,031st most popular surname with an estimated 2,487 people with that name. [1]

Kappel migration to the United States +

Kappel Settlers in United States in the 18th Century

Kappel Settlers in United States in the 19th Century