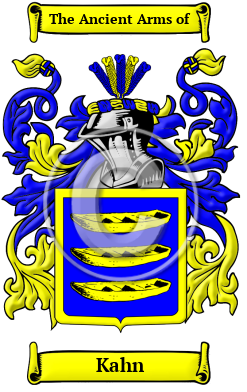 Schleswig-Holstein, which is the northernmost state in western Germany, is the homeland of the proud surname Kahn. Schleswig, which was included in the empire of the Franks as the "Danemark," was a northern border protectorate against the Danish Vikings. The duchy of Holstein was settled by the German Saxons during the 6th century. The Danemark, however, was granted to the Danes by Emperor Conrad II (990-1039), and the remainder of Schleswig-Holstein's history has revolved around the political question of Danish or German control of this region. Following the dissolution of the Holy Roman Empire in 1806, the two duchies were incorporated into Denmark. However, the Congress Of Vienna in 1815 granted the Holstein and Lauenburg to the German Confederation. In 1866, Schleswig-Holstein became a Prussian province and it became a part of the German Empire after the unification of 1871. After the First World War, a part of Northern Schleswig was restored to Denmark after the majority of the population had voted for reunion with Denmark.

Early Origins of the Kahn family

The surname Kahn was first found in Schleswig-Holstein, where the family contributed greatly to the development of an emerging nation and would later play a large role in the political conflicts of the area. The family branched into many houses, many of which acquired estates and manors throughout the surrounding regions, where they played significant roles in the social and political affairs. "Kahn" or "Kan" is a north German word meaning "skiff" or "barge."

Early History of the Kahn family

Notables of the time included Gün Temür (1377-1402), Mongol Khan of the Northern Yuan Dynasty in Mongolia, He ruled from 1400 to 1402, he was defeated by Gulichi (1402), who killed him as a result; Dilawar (Dilawar Khan Ghori), governor of the Malwa province of central India during the decline of the Delhi Sultanate, after serving at the court in Delhi, appointed governor at Dhar (1390-91), took the title of 'Amid Shah Da'ud; Orug Temur Khan (Gulichi), Mongol leader who temporarily enthroned himself Khan of the Mongols in the early 15th century, appeared in Mongolian history, leader of the Oirats, particularly...
Another 118 words (8 lines of text) are included under the topic Early Kahn Notables in all our PDF Extended History products and printed products wherever possible.

Kahn migration to the United States +

Kahn Settlers in United States in the 18th Century

Kahn Settlers in United States in the 19th Century

Kahn Settlers in United States in the 20th Century

Kahn Settlers in Canada in the 18th Century

Historic Events for the Kahn family +